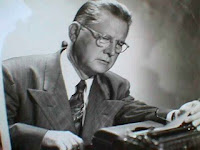 Back in 2010, I spent part of the summer at the University of Texas – Austin. I was researching a biography of Erle Stanley Gardner courtesy of a fellowship from the estate which was administered by the school.

I had 635 boxes of material to review and take notes on to have a complete picture of the author. Gardner never did anything by halves, so it was not surprising that his life had been boxed up and donated to the Harry Ransom Center.

During those days of work, I had a box delivered to me, which had not been cataloged. The correspondence was actually inside a paper grocery bag. As I pulled the papers out, I realized that I had a wealth of new information. Most of the correspondence was between Gardner and his long-time editor Thayer Hobson of Morrow. 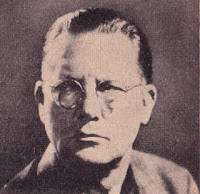 Some of it was fascinating for reasons that won’t be discussed in this blog entry, but one item that caught my eye was a mention of The Knife Slipped, a Cool/Lam book that had never been published. From all indications, The Knife Slipped should have been the second book in the series written in 1938/1939, during what I consider to be Gardner’s most productive and creative period.

At first, I tried to cross-reference some items to see if the book had been renamed or repurposed as a later book, but I could find no records of that. I checked with the librarians who assured me that a book with such a name was in the library materials. There were a number of half-started novels and short stories, but this appeared to be a complete extant book.

Two reasons stood out as to why Hobson did not wish to publish the book. First, he wanted more character development for the two main characters, Cool and Lam. I was a bit surprised. Plot and situations were Gardner’s forte. Perry Mason was rarely described, had no interior monologues, and very little backstory. From a standpoint of 70+ years later, this was a moot point for readers. They’d met the duo in 29 other published cases.

The other reason was content related. Hobson found the storyline to be too risqué for the audiences. Gardner was not afraid to include curse words in his works – or in his everyday life either. Again that would not prove a problem for current audience. Even the most salacious story of 1939 would be considered tame by today’s audiences.

Over my time writing about Gardner, I came to appreciate the Cool/Lam novels more than Perry Mason. That might be sacrilege, but they represent a more hardboiled, pulp-oriented story. Gardner had plenty of experience with those, writing 625+ shorter works for the pulps. Cool and Lam were the worthy successors to Ed Jenkins and Ken Corning. Gardner could be himself more in these books, and his infectious personality and wit come through in these books.

I tucked the information away as I made my way through the rest of the boxes. In late 2014, I spoke with Charles Ardai about the book. Hard Case Crime had done a wonderful reprint of Top of the Heap a decade earlier. He was interested in the book, so I put him in touch with the estate to work out the details of printing a full copy of the book for review.

Tomorrow, December 6, 2016 will be the release day of The Knife Slipped, the first new Erle Stanley Gardner novel since 1970. I’m thrilled to have been a small part of this project. I would likely include this title in my top 10 of the Cool/Lam cases, and perhaps even in the top 5.

Posted by Jeffrey Marks at 2:11 PM